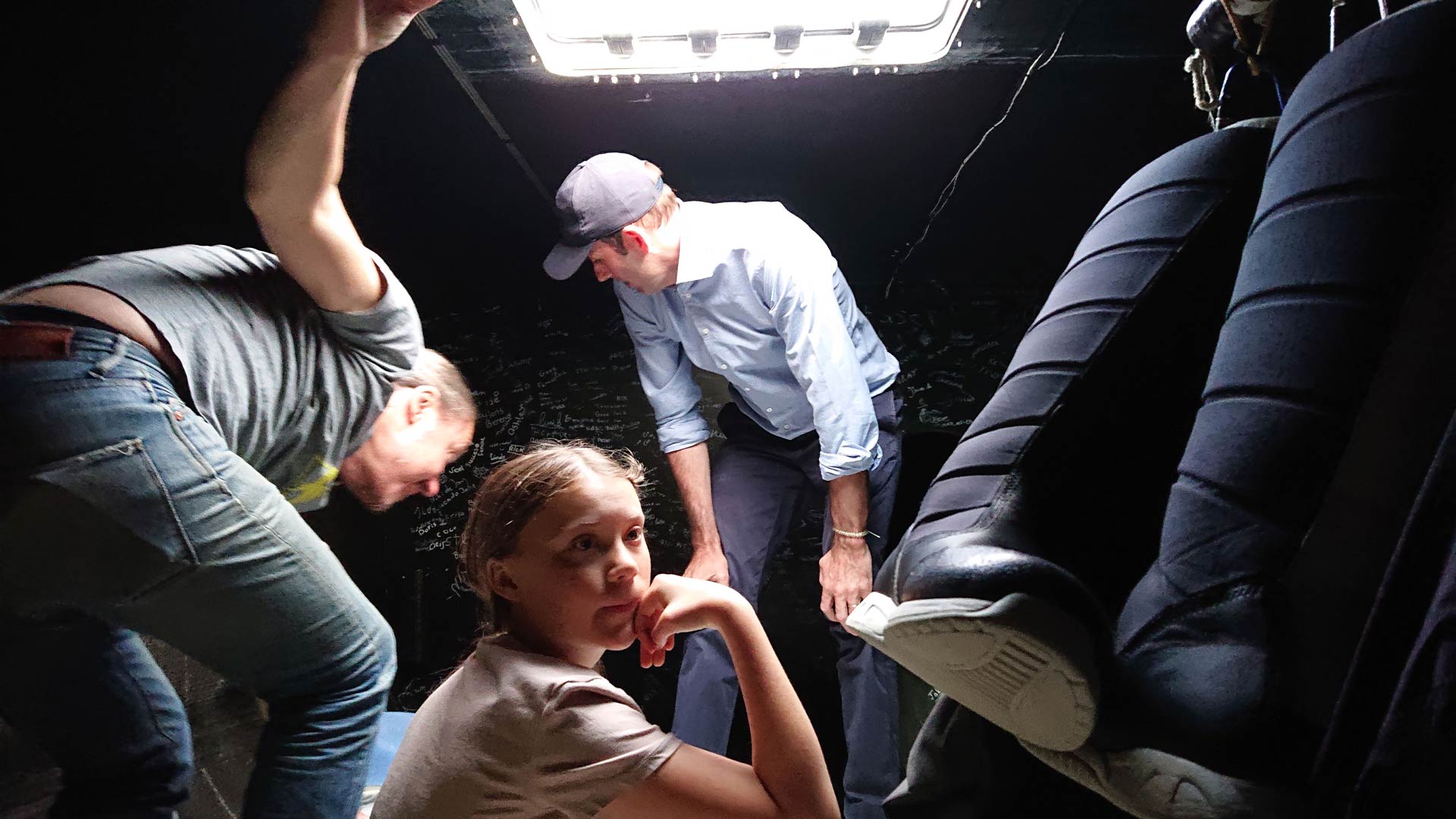 Today you will set sail to cross the Atlantic. From Plymouth, England to New York, USA. When you last year started talking about sailing to the UN meeting in USA, you primarily viewed it as a sustainable transport. To do what most other people would have done, arguing that you had an important mission and therefore was justified going by airplane, was never an option for you.

You investigated going with a transport vessel or even to take the eastern way around the globe. For some time the option was the southern route over the Atlantic along with the trade winds. But it is long and this time of the year also include the risk of dealing with hurricanes.

You ended up choosing the northern Atlantic route. It is the shortest distance, not too warm and humid. Well, that is apart from all the moist and water the prevailing westerlies and extratropical cyclones, i.e. low-pressures, cold-fronts and mid-latitude storms, create in interaction with the ocean.

The crux with the northern Atlantic route, going from Europe to America, is that for lion’s share of time you will deal with variations of head-wind due to prevailing westerlies. The northern route is perfect going west to east. But as long as you don’t get stuck in a high-pressure, you will manoeuvre your sailboat to go in whatever direction you want.

There will be many reasons why the sail trip will make a lasting impression on you. Whatever vehicle you have travelled with before, to sail across an ocean is something extra. The first time you sail off-shore, watch the sun rise and set beyond the 360 degree ocean-horizon, experience a cloud-free night where the atmosphere is not polluted be either aerosols or light from surrounding cities, watch millions of stars in the Milky Way, small and large creatures living in the ocean, ride through a storm, pondering all the thoughts and conversations there are time for on board your ship, not to mention when you spot birds and land for the first time after a many days at sea.

The ship itself on the ocean is like a miniature of a society. Whatever tools, knowledge and skills you bring, is what you will have to do with. Of course you can catch some fish, collect rainwater and today also connect knowledge via satellite-communication. But you still have to handle whatever happens with whatever you have brought.

Things break, people get sick and there will be conflicts even over small matters. But on the boat there is no escape. One has to deal with everything. And that in itself is pretty beautiful and illustrative.

In ”the modern” life in cities many people don’t see the connections and relations between people and people, and nature we all depend upon. Neither do many people realize how changes in climate and ecosystems far away from them will impose changes to their life, today and in the future. But on a sailboat it is obvious, because everything is short distance and connected. There is a reason for the proverb ”to be in the same boat”.

The earth is round and there is no risk of falling over any edge when sailing towards the horizon, no matter how far one goes. But using geometry as a metaphor, there are slippery slopes and the world is about to accelerate along one or more of those. Science communicated this decades ago -and had societies acted promptly then, for example around the time for the first report from IPCC 1990, or why not in the 70’s when Limits to Growth was published and we had the first large oil-crisis?, we wouldn’t be in the climate crisis we are in today.

Today we make fun of people who claimed (some still claim!) the earth is flat. In the future people will blame and sue those who today are in the business of actively denying and counteracting the scientific knowledge about anthropogenic climate change and other man-made global changes, threatening resilient ecosystems and societies.

But many people understand the science and are concerned. However a lot think that their capacity to make a significant impact and change the devastating trajectory is too small. But then someone thought and said ”no one is too small to make a difference” 😉 Thank you.

Science is clear. Momentum among people grow. Humanity need to transform, or we will loose biodiversity, resilience, species and infrastructure beyond the carrying capacity of ecosystems and our societies. Systems collapse all the time, but we drive unprecedented changes and intensified collapses. It will force us, and all other life on the planet, into very uncomfortable adaptation. Individuals, eventually societies, suffer and die. Therefore, failure to mitigate the driving forces promptly, is not an option.

Greta, you will have a very interesting, intensive and important year in America. But before that, starting this afternoon, take the opportunity to enjoy your journey with Malizia II, the crew and the ocean as you read the sky and manoeuvre your ship with a deepening understanding and relation to nature.

The image was taken June 29, 2019 in Stockholm as Greta was doing her research and was invited to see the interior of a VO65. Also in the image, Gretas father Svante Thunberg and Richard Brisius, The Ocean Race.
Greta and crew will sail Malizia II with Boris Herrmann, an IMOCA 60. 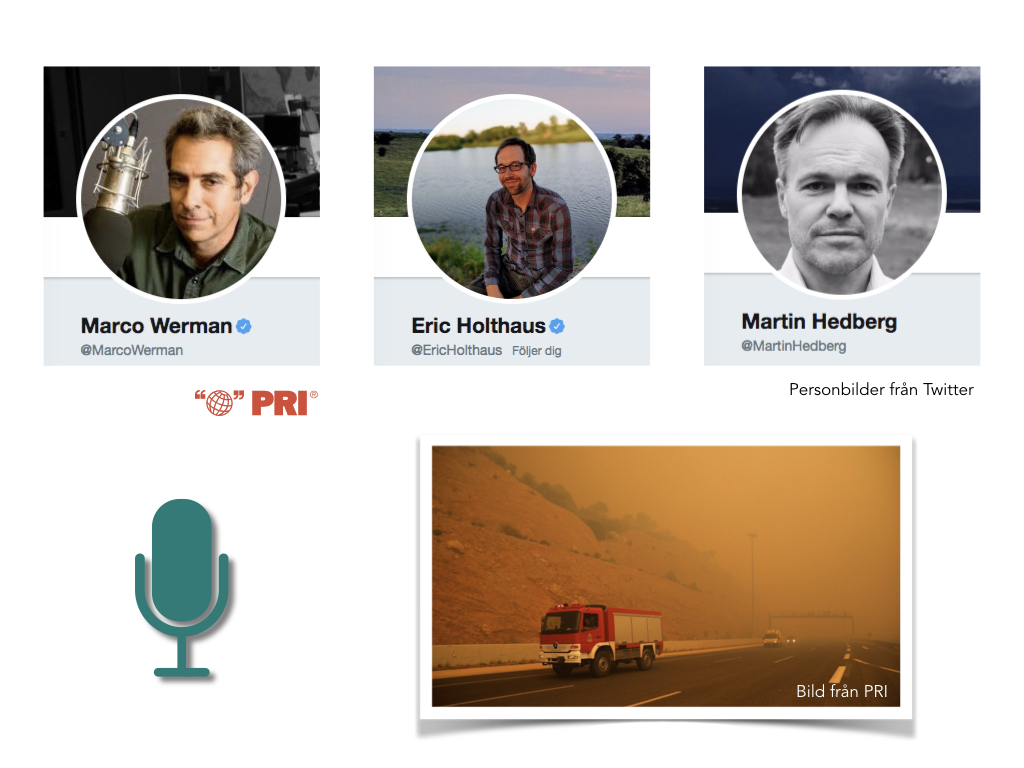 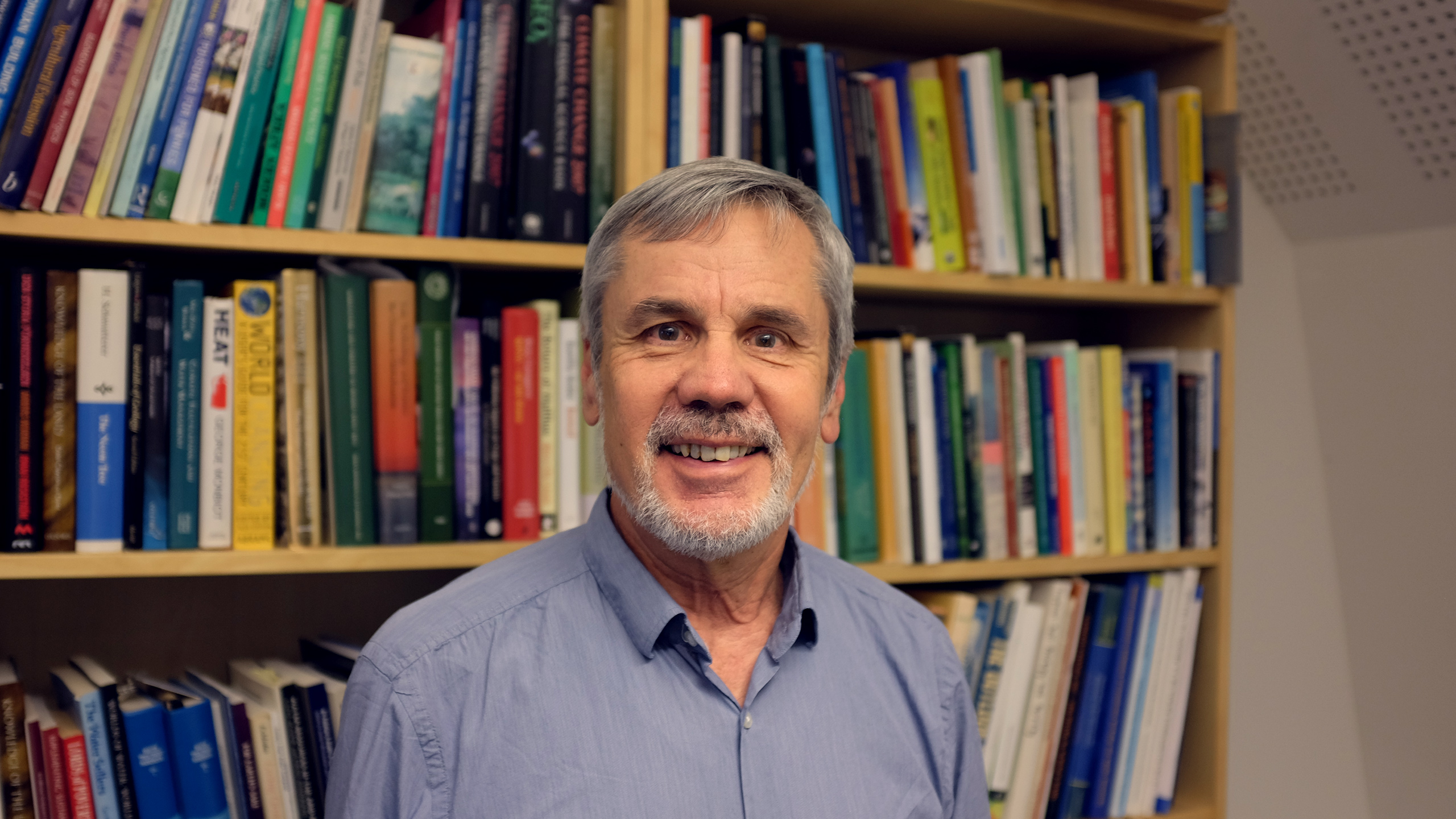 This weeks episode is an interview with Will Steffen. He an Australian Earth system scientist and he knows a lot about things like the biosphere, glacial cycles, ocean acidification, fossil industry, geo-engineering, complex system, feedbacks, resilience and tipping points.

One of the stories Steffen will share with you is the situation when Nobel prize winner Paul Crutzen invented the name and concept of The Anthropocene. Will was one of the scientists in the room as it happened in at a workshop in Mexico 2000.

He will also describe the The Great Acceleration, another concept that was born with Will and his colleagues at IGBP.

He shares his top three high-level tasks that we need to manage a lot better than we’ve done so far, Radiative balance, Human Equity and our connection to the Biosphere.

We also talk about metaphors, energy, tipping points in nature as well as in the social-political system and the post-truth era in society.

Conclusions… a lot. For instance tipping points. Both in nature, for exemplet with the Arctic ice melting and it’s albedo feedback… But also the tipping points in renewable energy. We are so locked in to the view that the price of oil sets the price of all energy, consumption, travel, inflation and people worrying about their energy bills etc. But what happens if/when it is cheaper to build solar farms and put up solar panels on your roof-top than to dig up fossil carbon and build big infrastructure like coal fired power plants? That is a shift, not only in how we produce electricity, but in the way the price is set and who is to get the money. It is a shift of power, in many different ways.

I slso ask Will about his favourite metaphors, for example to describe complex systems, feedbacks etc.

Sarah Cornell about The Anthropocene 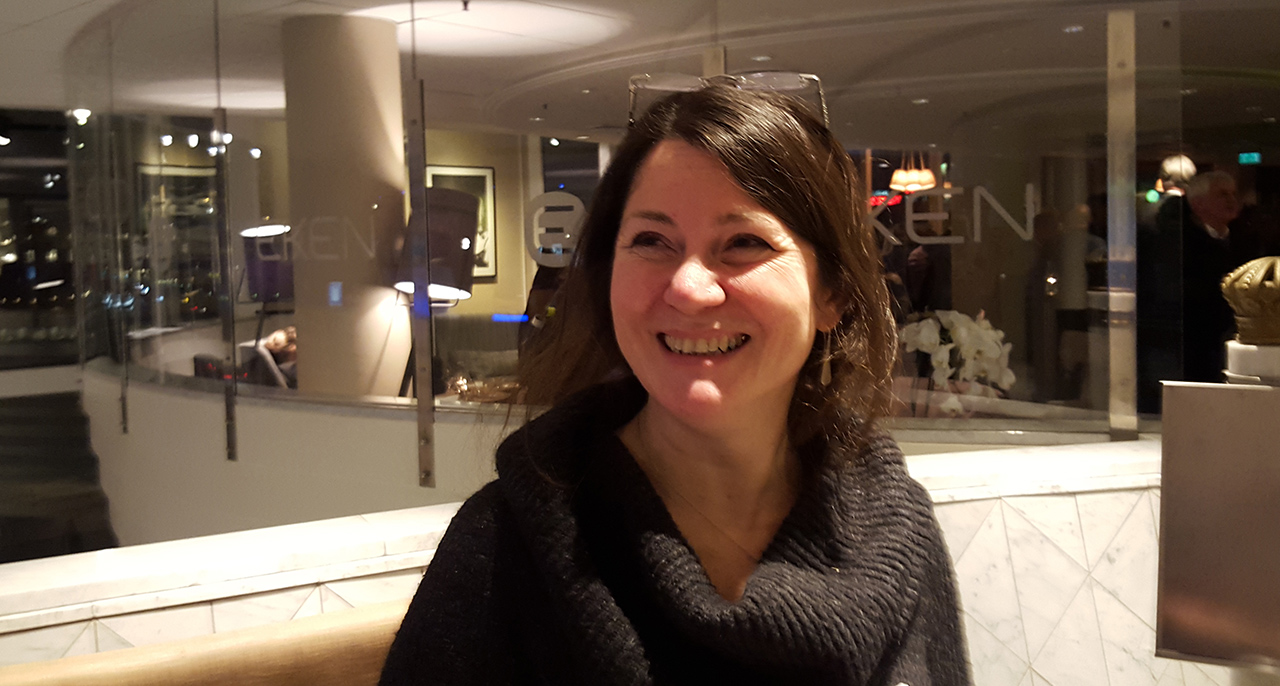 A conversation with Sarah Cornell, a scientist and researcher at SRC, Stockholm Resilience Centre, about The Anthropocene, ecosystems, feedbacks (both in nature and in models), Planetary Boundaries, the SDGs, dinosaurs and what it takes to create major shifts on this planet.

Some word explanation might help…
–Endogenous substances and processes are those that originate from within an organism, tissue, or cell. (Wikipedia).
– SDGs: The Sustainable Development Goals: ”…a universal call to action to end poverty, protect the planet and ensure that all people enjoy peace and prosperity.” (UNDP).
– Planetary Boundaries: ”…a set of nine planetary boundaries within which humanity can continue to develop and thrive for generations to come” (SRC).

The interview was made January 14, 2016 at the same event where Alan AtKisson had a release event around the SDGs. You can listen to him in this episode. 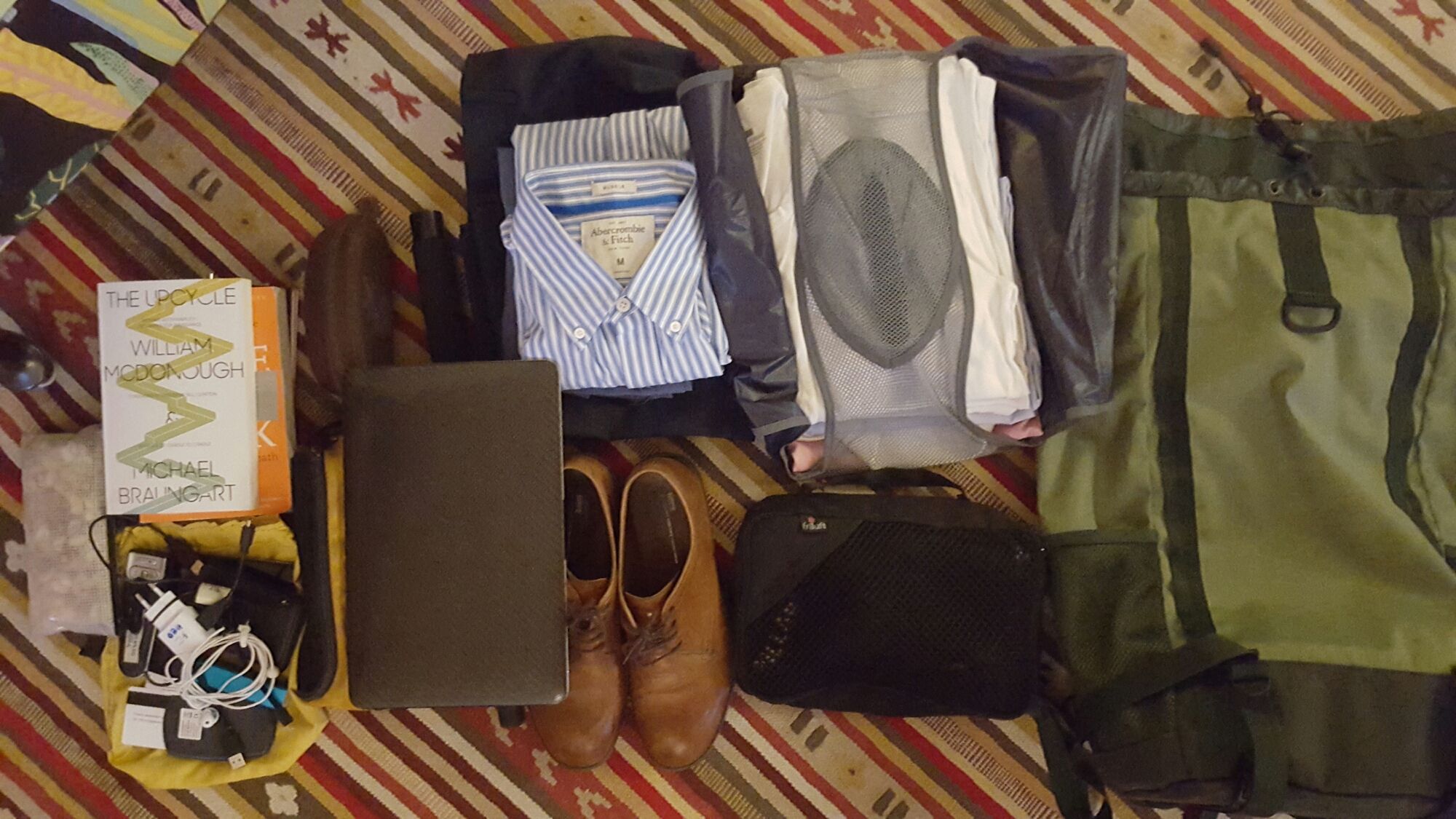 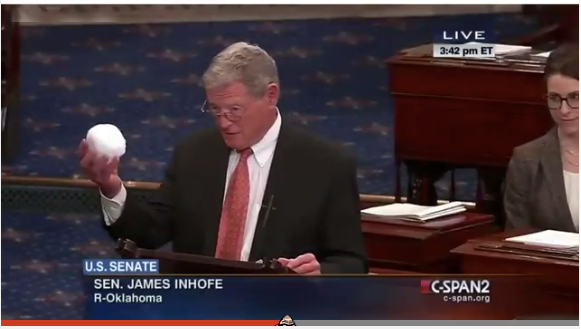 ”…You can either believe the United States Navy, or you can believe the Senator With The Snowball…”

”…Every major American scientific society has put itself on record — many of them a decade ago — that climate change is deadly real. They measure it, they see it, they know why it happens, the predictions correlate with what we see as they increasingly come true…”

James Hansen interviewed by The Economist.

Interesting conclusion that the Conservatives should be the ones in the fore-front of mitigating climate change. Because if humanity don’t act soon, the government will have to take over more of our lives. Governments are the only ones strong enough to deal with all the problems we are facing if we don’t mitigate climate change -and that for sure is something the Conservatives don’t like.

But the insurance industry looks at historical data, old and new, in order to assess the risk for potential disasters and put a price on premiums. When climate is changing, the old data is… -old.

And that turmes the analys from that data into something that does not represent reality. This has implications for risk, economy and ultimately well fare and lives.

As the insurance industry realizes the new risks and probable events, the public may find it hard to accept this new pricing of risk. It is therefore in both the public, governmental and insurance industries interests that everybody stays well informed about what is known and understood from a scientific perspective about climate change and future possible events.